The retro resurrection trend started by Volkswagen in 1998 when the "bug" was brought back into production after 23 years (a superb plan on paper that was never as big as anyone thought it was going to be - BUT) is nonetheless alive and well -proof positive directly above in orange.

The Fiat 500 and BMW Mini will reinforce that thought and it's not a big leap on this side of the Atlantic to see a Challenger R/T, Charger or Dart. Probably something to with Daimler-Benz AG merging with Chrysler in 1998.

The Beetle, now assembled in Viet Nam (despite a continued strong resemblance to the original), is losing the old-time clone label in more than name only. The car is no longer the "New Beetle" - just the "Beetle" and the oem upgrade styling is evolution in the best sense.

The romantic aspects have been trimmed back and the iconic people's car is looking more and more like the 21st century with a lower profile and stronger lines. The 2.0t engine can be punched up with plug and play German software and JE DESIGN has added just enough styling to make it stand out on the street. Call LLTeK toll-free in North America 1 888 465 5835 - Business Hours are 8:30 AM to 5:00 PM ET Monday through Friday (GMT -5). 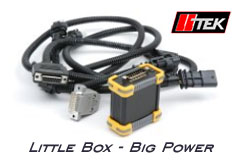